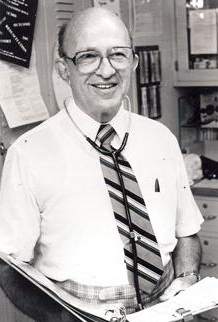 The Robert M. Heavenrich, MD, Endowed Lectureship in Pediatrics is one of the department’s most important contributions to the land grant and public service missions of Michigan State University. The annual Lectureship provides a high quality, locally accessible source of continuing education credit for community pediatricians, and an opportunity for interested individuals to meet and interact with leading pediatricians on a personal level. With presentations offered each year in Lansing and in Saginaw, the Lectureship attracts pediatricians as well as other community physicians, residents, students and interested members of the community. The program also provides a vital link between the university and the communities it serves, and it strengthens MSU’s community based pediatric residency training programs.

The Endowed Lectureship in Pediatrics was created to pay meaningful tribute to the life of Robert M. Heavenrich, MD, a beloved Saginaw pediatrician and a very special member of the College of Human Medicine’s community-based volunteer faculty. The Endowment has served to institutionalize the Lectureship Program, thus assuring its sustained strength in perpetuity. Continued support of the Robert M. Heavenrich, MD, Endowed Lectureship in Pediatrics will help to enrich the program by enabling the expansion of the number of lectureships offered and safeguarding against the effects of inflation on a program in which travel costs predominate.

In 2008, the Heavenrich family also instituted two endowed scholarships from the Heavenrich fund to be given annually to outstanding medical students interested in pediatrics in their second or third year of medical school.

Or to pledge your commitment to the Lectureship or to receive further information, contact the Office of Development, College of Human Medicine, A217 East Fee Hall, East Lansing, Michigan 48824-1316 or call them at (517) 353-5153. Contributions should be made payable to Michigan State University, designated for the Heavenrich Lectureship in Pediatrics, and directed to the above address.

Give online to the Heavenrich Endowed Lectureship