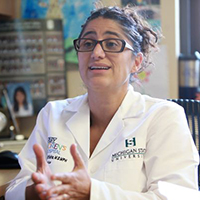 Our very own Dr. Mona Hanna-Attisha traveled to Washington, D.C. last week alongside City of Flint officials to testify before the Environmental Protection Agency's National Drinking Water Advisory Council. Dr. Hanna-Attisha, Assistant Professor and Director of Pediatric Residency at Hurley Children's Hospital in Flint, Michigan, played an important role in bringing to national attention the rising levels of lead found in Flint's children following the city's 2014 decision to extract its drinking water from the Flint River. Despite these revelations, interests in Washington are pressuring the EPA to weaken the "Lead and Copper Rule", which requires systems to monitor drinking water at customer taps and sets sets acceptable limits for lead and copper in drinking water to 15 ppb and 1.3 ppm respectively. Representing Michigan State University, Hurley Medical Center, and children across the country, Dr. Hanna-Attisha and her colleagues took a hard stance against the proposed revisions, citing case studies in Flint as representative examples of what ill may come from allowing monetary interests to supercede consideration of the health and well-being of our communities.

Dr. Mona Hanna-Attisha, a Hurley Medical Center pediatrician who helped uncover rising lead levels in Flint children, joined Edwards in warning that what happened in her city is likely happening elsewhere around the country.

The severity of lead poisoning, with its impacts on childhood development that can take years and generations to track, make the situation unacceptable, she said.

“When (lead) is in a population, it’s damning, absolutely damning,” Hanna-Attisha said. “And it’s preventable.”

Hanna-Attisha strongly disagrees with a recommendation to revise the Lead and Copper Rule to make water testing for lead voluntary instead of mandatory.

“Many of the people here are from water utility companies, and they don’t want to have to pay for water-line replacements,” she said in an interview after her testimony. “It’s all about money.”